It was round 3 of the 2018 Challenge Cup and we were drawn away to Benetton Treviso.  It would be the second Euro trip of the competition and as always Quinssa had secured match tickets and the travelling supporters were looking forward to a great weekend away.  Many had booked a long weekend as Treviso, being close to Venice, presented an ideal mixture of Rugby and Culture with the odd few drinks thrown for good measure!  I was travelling with my wife Maggie and Lou Hopkins. Our route was Gatwick to Venice and on to Treviso by taxi. We had arranged to join up with other Quinssa members at our first pub meet up of the weekend by about 9pm.

We settled into our EasyJet flight with many other Quinssa members and enjoyed the first drinks of the weekend.  Our flight was making good progress when, with about half an hour to the scheduled arrival time of 19.40, the pilot announced that Venice was fogbound and he did not have enough fuel to circle. Consequently he would be diverting to Trieste Airport to pick up more fuel and wait for the fog to lift.  Oh great!  However, with a bit of luck we would be allowed to disembark and go straight to the hotel and more importantly the pub.  If only life was that simple.  EasyJet do not use Trieste airport so could not simply refuel and get us on our way when the fog eased.  Moreover the only passengers eventually allowed to disembark were those with only hand luggage.  Surprise surprise most of us had luggage in the hold so we were forced to remain on board. We sat for over an hour watching the local dispatcher walking backwards and forwards between the terminal and the plane, clipboard in hand counting passengers and checking that remaining cabin baggage had an owner while the pilot was on the phone to head office persuading them to negotiate a deal that would allow him to buy a few gallons of Italian fuel. We were starting to give up the will when at last, some good news, the fog was lifting and the plane had been refuelled.  We were soon to be on our way.  Our taxi had confirmed it would wait for us in Venice and that it was big enough for Steve and Pat Scott to jump in as well. The smiles started to return.

We eventually arrived at our hotel just before midnight busting for a beer and delighted to hear that the pub meet up was still going strong and beers were waiting for us on the bar.  Such great people these Quinssa members!  Arriving at the pub to cheers and a round of applause it was clear that several had arrived a lot earlier and had made a point of sampling most of the local ales!  Travel stories and a few more beers exchanged we called it a night and retired in readiness for match day. 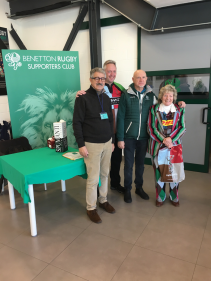 Traditionally Quinssa obtain the match tickets and arrange a pre match meet up with the opposition supporters.  This was to be special as over 300 supporters had purchased tickets and Benetton had access to a bar / restaurant at the ground and were anxious to entertain us.  Many had also purchased the meal with soft drinks offered by Benetton. However we arrived to find tables laid with bottles of red wine and, being in one of the key production regions, numerous bottles of Prosecco.  Souvenirs, shirts and words of thanks were exchanged and the Quinssa committee were given a box of Radicchio (more about this later!!). 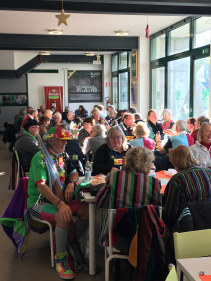 Photos taken before we tucked in to traditional pasta dishes and the obligatory burger and chips washed down with copious amounts of beer wine and Prosecco. Did we really have to go out in the cold to watch a rugby match?  Well I suppose so! Quins started as favourites and an early try from Alex Dombrant got us off to the perfect start. The game was neck and neck and when Dommers scored his second we were quietly optimistic for the win.  But this is our beloved Quins and when Benneton crossed the whitewash in the dying minutes we had once again clutched defeat from the jaws of victory.  26 -21. Oh the joy.  But at least the camaraderie from fellow Quinssa members had been great and the welcome from the Benetton Supporters club a joy to behold. 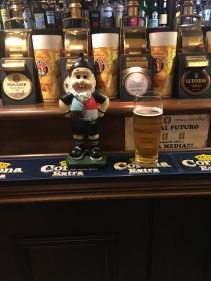 But just like the game there was to be a further twist.  As part of the generous hospitality from the Benetton supporters, Pat and Lyn had been presented with a box of Radicchio.  At the time we did not realise that this was a local delicacy and we had arrived at the time of year when it was harvested. We really did not know what to do with it but did not want to insult them by leaving it behind so we dutifully watched the game clutching our box of the red delicacy.

After the game we were making our way back into Treviso to drown our sorrows (with Prosecco at 2 euros a glass). The ground was a way out of town and we were trying to find our way back when a very kind young man stopped and gave some of us a lift. He would not take any money and in desperation we offered him the Radicchio. He was unbelievably grateful and said that his wife would be over the moon. We were also over the moon as we did not fancy packing it in our cases!  Back in Treviso there was time for a final drink and meal before heading our separate ways for the cultural part of the weekend.