One of the most memorable games in terms of atmosphere, tension and drama. Stade had never been beaten home or away, so it was the perfect test for a young group of players.

This was one of my first away games, arriving in Paris for the weekend with the anticipation of the match ahead. It was a weekend I will never forget, particularly with my nan being too nervous to watch the end of the game with the clock in overtime!

A cultural day in Paris culminated with us going into a bar to buy a beer before the game. Me, mum, dad, granny and my sisters all ordered at the bar. I was convinced the kickoff was 4:30pm French Time and my dad said “I’m sure it’s 5:30pm.” We were a bit baffled as to why all the streets and bars were empty. As we ordered our beers we then saw Quins and Stade players running onto the pitch on the TV in the bar. The game was starting! With no time to down our drinks we hurried as quickly as we could to the Stade de France. The sight of the ground being full was epic, with the cancan dancers, the pink goal posts and the stands a sea of pink with the flags and noise in full flow. I remember hearing the crowd making their voices heard when we approached the stadium, me hoping my voice shouting “COYQ!” could be heard from outside! Eventually we made it to our seats, Williams having scored the opening try. It was already 0-7. The small pockets of Quins supporters could be seen however among the see of pink French enthusiasts when Jordan Turner Hall scooped up the ball and darted for the line down the blindside. Evans  missed the conversion and it was 0-12. However, the French crowd came alive with Legizamon charging through the Quins defence to score under the posts. 7-12. 80,000 French people can make a lot of noise but small pockets of Quins support amid the waves of rippling pink flags made their voices heard too. 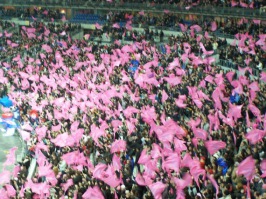 Quins lead at half time with more drama to come.

From then until the whistle, Harlequins were brutal in defence. Led by our captain, Will Skinner, who tackled like a man possessed, also supported by Care and Nick Easter, Quins stopped Stade again and again on the gain line. With victory inevitable, there was one final twist in the tale. With the clock in the red a penalty was won for not releasing, Care spoke to referee Alan Lewis - "I may have said something," the scrumhalf said later - and the penalty was reversed, Quins now had to defend for what felt like the longest minute in existence! The boys saw it out and eventually won 10-15. It is not Quins without drama or feeling like your heart is going to leave your chest!

The booing of the unhappy French could not erase the elation and relief we all felt at sealing the win! The most poignant memory of the whole trip was when me and my dad, yelled “Come on you Quins!” amid a sea of pink shirts in the tunnel departing from the stadium. Most French turned around and took little notice, probably murmuring something about the English! It was my first European cup experience and will never forget it! We met up with some friends afterwards and celebrated with some quality French food and the hospitality of the crowd afterwards.

At the return fixture at the stoop, a French supporter made a joke about my signed Harlequins shirt, signed by Conor O Shea and Nick Evans. My nan who was with me said “that shirt is priceless!” I think the French fan understood what she meant!

Richards had a few words to say after, speaking of the grit and determination of the men in quarters.
"It is not just the defence we had but also the discipline," said Richards, almost hitting the nail on the head. "A lot of the boys grew up here." 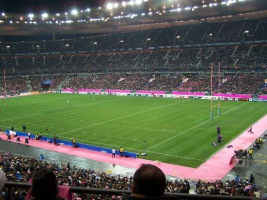