Timisoara, a weekend in Romania 2016

We were drawn against the Timisoara Saracens in Romania not long before Xmas.  There were many warnings of how cold it would be so we packed vast quantities of thick clothes.  Over 200 supporters had booked tickets (at zero cost) and many had also booked the meals before and after the game.

Chris (Mr Harlequin) and I went out a day early and were given a guided tour of the city by one of their supporters.  We were lucky as it was not that cold and it is a beautiful city. We travelled from one square to another where he explained the very diverse amazing architecture built by the different armies who had invaded the city over the centuries. It was during the tour that he explained that the game would be played at the council ground as their club ground did not meet the competition’s rules.  If my memory serves me right, it did not even have a club house.  They had to pay for the use of the council ground.  We asked why our tickets were free.  He explained that they were trying to get the local people to go to games and become involved and that they would not go if they had to pay.  They therefore thought that it was unfair to charge us.

The game day dawned bright and clear. Although it was cold the sun shone and it was not as freezing as we had imagined before the trip. The Council ground was quite basic and we sat on concrete steps but no-one minded as the Timisorara supporters were so welcoming and pleased to see us.

The first quarter of the game was pointless apart from a penalty scored by the home team. This prompted a quick response from Quins who then scored three tries by Dave Ward, George Merrick and Aaron Morris and led 3-21 at the break.

Into the second half, with the Quins supporters singing and cheering throughout, Charlie Walker, who was voted Man of the Match, scored a try after picking up a loose ball in his own half and out-pacing the opposition. The Romanians never stopped trying and were committed to the end, but fatigue was a problem and Joe Marchant scored the last try, with the final score 3-42. 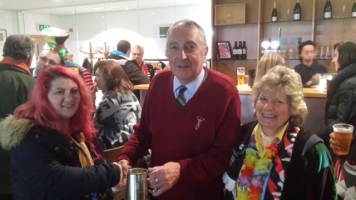 After the game we went back to a large pub for the meal and a few drinks! We were joined by a group of lads from the Bucharest Harlequins.  Pat and Steve Scott had kindly bought out a case load of previous year’s Harlequins shirts and distributed them to the lads. They were absolutely delighted.
It seemed so unfair that they had to pay for the council ground and we had not paid for tickets so Pat and I borrowed a couple of Steins from the bar. Our supporters were very generous in their donations which we and presented to their committee.  They were so appreciative and received it with lots of hugs and tears etc.  Both teams of players came back to the pub for their after match meal.  Unfortunately our lads had to leave soon as they had a flight to catch but the Timisoara team stayed in the bar and mixed and sang with our supporters – it was a really great evening.

As it was near to Christmas there was an amazing Xmas market and each year as I put up the Xmas decoration that I bought I remember that weekend – it was magical.

When we got back we realised that we had £20ish in Romanian Leu and realised that we would not be the only ones coming back with spare cash.  We put a box on the Quinssa stand in the Kings bar the following week and members donated their spare Romanian Leu.  Bob Hiller presented it to Dana, the Timisoara committee representative – picture attached. In total we raised approximately £1200. They have used the donations to train school teachers to teach touch rugby to the youngsters.